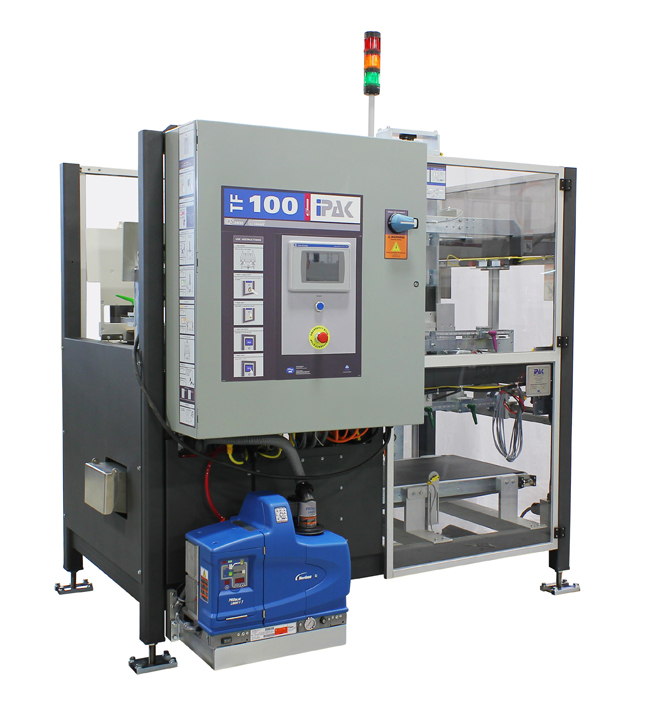 Richmond, BC – With its new model TF-100, IPAK, powered by ProMach, proves you don’t need a lot of floor space to get advanced technology and high quality, aesthetically pleasing tray packages. The TF-100 is IPAK’s smallest footprint servo-based machine yet, 56% smaller than its TF-200 model, making it an immediate industry leader in saving production space.

The TF-100 is ideally suited for customers who have limited manufacturing space and need to produce 25 to 35 high quality, well-formed trays per minute. Customers with vibrant graphics or those stepping up their tray design to thin corrugate in E-Flute or B-Flute designs will also appreciate the TF-100’s flexibility and precision in forming strong, well bonded trays. Customer applications include snack foods, desserts, craft beverages, and candies, among others.

“The TF-100 packs advanced features and technology in an incredibly small machine,” said Dyrl Nixon, IPAK Product Manager. “The TF-100 delivers unequaled efficiency, performance, ease of use, and investment value in a size that fits almost any production environment. IPAK systems deliver stronger, more consistently formed, square and securely glued trays than any other machines in the industry.”

The TF-100 tray former will be featured at Pack Expo International, November 2-5 in Booth N-5331.

At Wexxar Bel, corrugated container packaging applications are limited only by the imagination. Our Wexxar case formers and case sealers have been installed in nearly 40 countries and consistently bring customers the lowest cost of ownership and the highest standards of safety. Wexxar also offers the Bel line of corrugated box sealers, tapers, and packing systems as well as the IPAK line of tray and bliss formers, stackers, and sealers systems. As part of the ProMach End of Line business line, Wexxar helps our packaging customers protect and grow the reputation and trust of their consumers. ProMach is performance, and the proof is in every package. Learn more about Wexxar Bel at www.Wexxar.com.

← Back to Press Releases